BBQ sauce is a favorite of many families, particularly those in Southern America.

It is a vinegar, tomato puree, and mayonnaise based sauce.

This is then flavored with things such as liquid smoke, spice, onion powder, mustard, black pepper, and molasses. 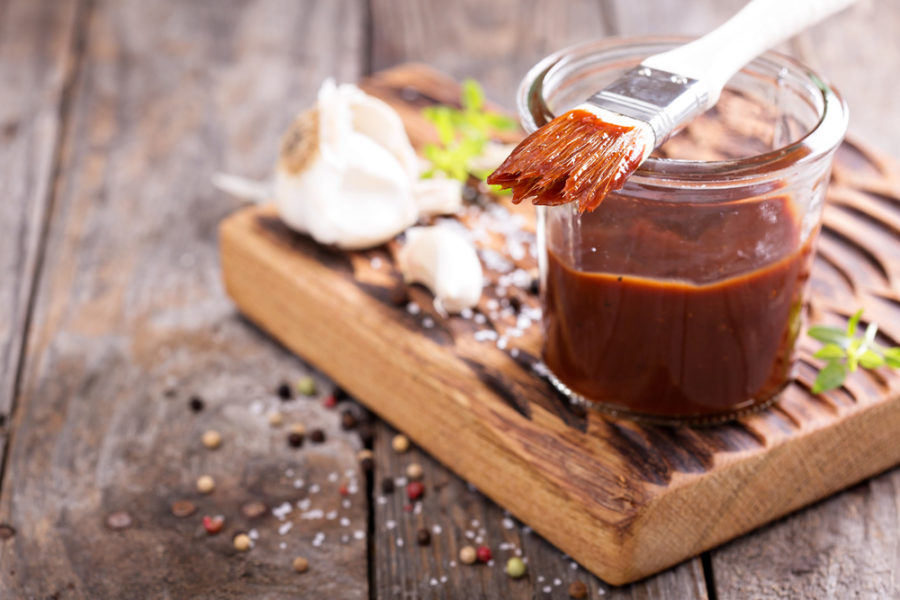 Its origins can be traced back to the 17th century but was first commercially available in 1909.

Despite its commercial success, many families still opt to create their own version.

This article will teach you how to thicken homemade BBQ sauce so that it becomes the perfect condiment to have on your table.

If you are making your own BBQ sauce, the easiest way to thicken it is to reduce it further. Put simply, this is boiling off the excess water in the sauce so that it becomes less viscous.

Remove from the heat and allow to cool in a bowl until ready to serve.

To thicken the sauce with cornstarch you will need to make a cornstarch slurry. Mix 1 tablespoon of cornstarch with ¼ cup of cold water and stir until a thick paste is formed.

This will be enough to thicken around 1 cup of BBQ sauce. If you have a larger quantity than this, increase the slurry quantities proportionately.

To make a flour slurry, follow the same steps as above. The only difference is you use 2 tablespoons of flour per ¼ cup water.

Place the BBQ sauce in a saucepan over a low heat. Pour the slurry into the BBQ sauce and continue to heat. Turn the heat up and stir occasionally until the sauce boils.

When the BBQ sauce comes to the boil, reduce the heat and stir continuously for 2 minutes. Cook until the sauce reaches the desired consistency and then remove from the pan. Set aside to cool until you are ready to serve.

For this method, you follow the same steps as the cornstarch and flour methods.

If you do not have all-purpose flour you can substitute for 1½ tablespoons of cake flour or 2½ tablespoons of bread flour. Cake flour will create a thicker roux as there is more starch in the flour.

Heat the butter in a saucepan over a low heat. Allow to melt and then whisk in the flour. Cook for about 5 minutes to ensure the raw flour taste has been cooked off. It should darken in color slightly and have a thick dropping consistency, similar to that of frosting.

Remove the saucepan from the heat. Add the BBQ sauce to the pan with the roux in.

Whisk well to incorporate fully and then serve. This will slightly alter the taste of your BBQ sauce, but it will be richer and nuttier.

This has the same ingredients as the roux method but follows vastly different instructions.

Place the BBQ sauce in a small pan and bring to a simmer. Drop the small beurre manie balls into the simmering sauce one by one. Continue to simmer the sauce until the balls have disintegrated and the sauce has begun to thicken.

Gelatin is what is used to thicken gummy sweets and set jellies. Per cup of BBQ sauce, you will need 4 tablespoons of cold water and 4 ½ teaspoons of powdered gelatin.

Sprinkle the gelatin on the surface of the cold water. Leave to sit for a few minutes.

Meanwhile, place the BBQ sauce in a small saucepan over a low heat. Add the gelatin mixture and whisk well. Bring to a simmer but do not allow the mixture to boil.

Remove from the heat and allow to cool. The BBQ sauce will not immediately appear thicker but will increase in viscosity as it cools.

For the tomato puree method, there are no real quantities to use. You should gently warm the BBQ sauce in a saucepan. Add a large spoonful or two of tomato puree and whisk through to incorporate.

Allow the sauce to simmer for a few minutes and remove from the heat once it has reached the desired thickness.

This method will work with butter, heavy cream, or coconut oil. Add 1 tablespoon of the chosen fat per cup of BBQ sauce.

Place the sauce and fat in a saucepan over a medium heat. Bring to a boil before reducing the heat.

Cook, stirring, for 2-3 minutes or until the sauce has thickened to the consistency you want. Remove from the pan and set aside until ready to serve.

This is a great way to thicken your sauce as well as getting in some extra vitamins, nutrients, and fiber.

Potatoes work well to thicken sauces, but any vegetables will work in the same manner. Other good suggestions include peppers, aubergines, and tomatoes.

We hope that these tips will help you fix any issues you may have with homemade BBQ sauce. There is no need to throw out a batch that is a little too liquidy anymore, armed with our tricks.

All our tips are easy to do and are centered around ingredients that you would normally have on hand in your storecupboard.