Every time we visit the grocery store there seems to be a new cut of meat available in the butchers' aisle.

It's hard to keep track of which cut is good for 'this', which has the least fat, which you should never serve rare.

The two cuts that we are currently being asked about the most are flank steaks and skirt steaks. Both these cuts are really delicious parts of the cow that are tough enough to grill.

Both cuts are long and have an unusual shape. A lot of people might not actually know that they are different cuts. 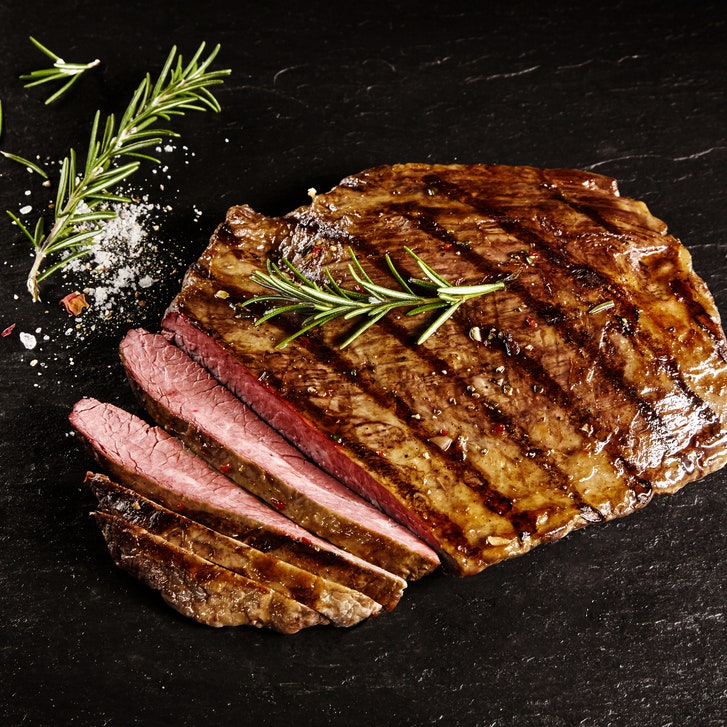 It's a rare day when we haven't been served one of these cuts burnt at a restaurant. Because of this, neither of these cuts have the glowing reputation they deserve.

In this article, we're going to teach you the difference between these two types of cuts, and we're also going to talk you through the best way to cook each of them.

Read on to learn the difference between a flank steak and a skirt steak.

What is a flank steak?

The flank steak is cut from the abdominal area of the cow. Being from that part of the cow it is a cut rich with muscle fibers and contense. This makes it a tough but tasty steak.

Because of this toughness, you will often find that flank steaks are sliced very thinly. They are also cut against the grain. The whole muscle, weighing roughly 2 pounds, is usually sold as one cut.

The thin-cut doesn't mean you're missing out on any flavors though as this cut is jam-packed with them. It is so favorable that it makes a perfect pair with complex marinades - as it can hold its own against them in the flavor department.

What is a skirt steak?

A skirt steak is cut from the cow's diaphragm. It is cut very close to where the flank steak is cut. For this reason, they are often thought of as the same thing. But that is not the case.

This cut is also a long cut, sold as a whole muscle. It is also a tough cut, but like the flank, it is still delicious. Again, it is cut very thinly to counteract the toughness.

The steak is cut from a muscle, so it is also heavy with muscle contents and muscle fibers. This is why the steak is so tough.

There are two types of skirt steaks - an inside cut and an outside cut. There isn't a huge amount of difference between the two. Outside cuts hold their shape better when they are grilled, for this reason, they are often served at restaurants. This also makes the cut more expensive.

However, the inside skirt offers just as good a flavor as its competitor. It is just not the choice of chefs because it can erratically shrink on the grill.

Skirt steaks also work well with marinades because of their intense flavors.

Because they have a dense concentration of muscle fibers Skirt Steaks should only be served rare or medium-rare. It is a great option for adding to stirfry or curries as it tastes best when seared.

It is essential that you cut this steak against the grain. This is key because cutting against the grain breaks down the muscle fibers in the meat without ruining it. Doing this makes the steak much easier to eat, it becomes a much more tender cut.

What is the difference between flank steak and skirt steak?

So, what's the difference between flank steak and skirt steak?

Well, the main difference between the two steaks is the concentration of muscle fiber inside the meat.

On many levels, these are two very similar cuts. They come from similar areas of the cow, they are both on and thin, and they are both served as the whole muscle.

However, due to the differences in muscle fiber concentration, these steaks have to be served differently.

Because they are so tough (due to their high muscle fiber count) skirt stakes can only be served rare or medium-rare. So if you like well-done steaks you should opt for the flank steak.

How to grill flank steak

The high concentration of muscle fibers in both of these cuts mean that they don't cope well with most grilling methods. The best way to cook them is the simplest - over an open grill at a high heat.

You can serve a flank steak at any rarity, so it can spend a little longer on the grill compared to a skirt steak.

This steak has an intense natural flavor so any marinade will have to be able to hold its own. Fresh flavors like citrus or umami options like soy sauce are great choices.

To cook this steak, place it on an open grill and cook for 5 minutes on each side. You can serve a flank steak well-done, so you can cook it for longer if needed. Sear both sides before serving.

How to grill skirt steak

As we mentioned skirt steak is best served rare or medium-rare. The best method of cooking a skirt steak is to sear it. This is why it works well in meals like stir fry.

Because of its intense natural flavor, if you want to marinate this stake you will need to pick a flavor that can compete with it.

Some of our favorite marinade options include a simple garlic butter, a heavy honey glaze, or a spicy jerk sauce.

To cook a skirt steak, cook over an open grill for three minutes on each side. Then to finish off sear on both sides. Be very careful not to overcook this cut.