Bacon is possibly one of the most popular cuts of meat in the USA right now.

It has become a breakfast staple. A pop-culture staple. And even a dessert staple…? We were skeptical but chocolate covered bacon is surprisingly delicious.

But has bacon always been a prince among meats?

The simple answer is no. It used to be seen as an inferior choice to Pork Belly. In America, the most common place you will see Pork Belly being used is in Asian cooking. The cut is still hugely popular in Korean and Chinese cooking. 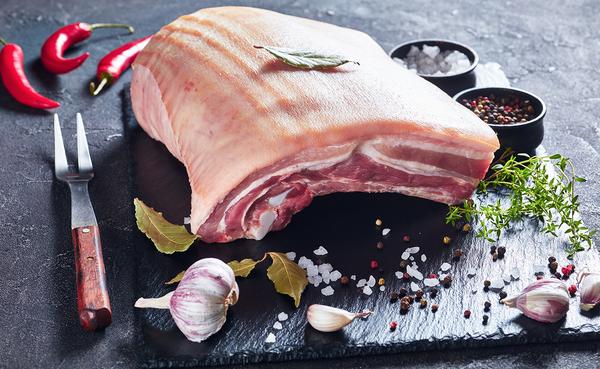 But wait… Isn't bacon cut from the belly of a pig? What's the difference? Are they interchangeable?

We've put together this article to answer all these questions for you. We'll be covering what Bacon and Pork Belly are. Where they are cut from, and how to grill them.

Let's jump straight into it…

Most of us know what Bacon is. Bacon is usually thin cuts of pork with thin ribbons of fat running through them.

The bacon in the USA is most commonly salted or brined to prolong its shelf life. In other places around the world, it is smoked as well.

It is quite common for American bacon to be pumped full of and colored with nitrates. These extend the shelf life of the meat and give it that pink hue that we have come to associate with this cut of meat.

It is possible to find Bacon without these unhealthy editions but it can be very difficult. If you wish to do this, avoid the grocery store meat and go to a local butcher or farm shop.

Not all Bacon comes from pigs. There are many different cuts called Bacon and they can come from cows, chickens, or turkeys.

Where is it cut from?

The most common type of Bacon in America is Streaky Bacon - when you think of Bacon this is most likely what you imagine. Streaky bacon is cut from the belly of the pig. This is where the pig stores a lot of its fat, hence the thin ribbons of fat that we get running through our Bacon.

Bacon can be cut from other parts of the pig, as well as other animals. These areas of the pig include the jowls, back, shoulder, or collar.

As you can see the definition of Bacon is actually pretty broad.

What is Pork Belly?

Pork Belly is traditionally sold in large slabs that include the pork meat as well as a few thick layers of fat.

This cut of meat is incredibly fatty but is notoriously moist when cooked correctly. Pork Belly is traditionally uncured.

Where is it cut from?

You would have never guessed it but Pork Belly is cut in large chunks from the belly of the pig.

What is the difference between the two? When should you use them?

Here are some of the key differences between Pork Belly and Bacon:

Pork Belly is sold in slabs that often weigh a few pounds. Bacon on the other hand is cut into very small slivers.

Because of this their cooking times and methods are drastically different. Pork Belly is often braised (this is very popular in Korean and Chinese cuisine), whereas Bacon is traditionally fried.

Pork Belly comes uncured. This means that the meat is not treated in any way to make it last longer on the shelf. Pork Belly is best cooked when it is very fresh and tender.

Bacon on the other hand is the complete opposite. Many countries salt and smoke bacon to make it last longer. Here in the USA, it tends to be salted or brined before being treated with nitrates.

Nitrates are used to add a pink color to the meat and to extend its shelf life. In large amounts, Nitrates can be toxic. The best way to spot Nitrates in your bacon is to look for a petrol like sheen on the surface of the meat.

Pork Belly is much bigger than Bacon slices and therefore contains a lot more fat. However, Pork Belly is cut from the area of the pig with the thickest layers of fat and is, therefore, one of the fattiest pork cuts.

The fat content of Bacon can be reduced by cutting away the strips of fat before cooking the meat.

How to Grill Bacon

You can either grill Bacon on its own or wrap other items in it (grilled pigs in blankets might actually have been sent directly from heaven).

Cooking Bacon on its own can take under 10 minutes, depending on how crispy you like it. Cooking Bacon when it is wrapped around other items takes a little longer. You may have to start cooking the items before wrapping them in Bacon to avoid burning the rashes.

Heat your grill. Place your Bacon directly on the grill, or in a small griddle (on top of the grill). Add a splash of oil, and leave to cook. Grill for 6 minutes for rare meat, cook for 16+ minutes for snappable, crispy Bacon.

How to Grill Pork Belly

We like to grill a Pork Belly in a smoker. After adding a maple or honey glaze to the meat, we score it, salt it and then leave it to cook in the smoker for around 5 hours. We smoke the Pork Belly at a low temperature to keep the meat moist and tender.